Long before Aloha had established itself in the local Australian surf scene in 1978, its founder Greg Clough (GRC) had already embraced the ‘aloha lifestyle’, having spent most of his time since leaving school hanging out in surfboard factories. However, it was not until 1969 that Greg’s future began to materialise, in the form of the surfboard company called CONNEXION, which Greg started with friends on Queensland’s Sunshine coast. Connexion through its success was moved to Kirra 2 years later to be more in touch with the burgeoning Australian Surf scene. Connexion proved to be an excellent building platform for Greg’s future, but he was restless in Kirra and felt that California was where it was at. In 1974 Greg packed up and jumped on a plane to the US. US immigration policies made it difficult for GRC to set up shop in California, so off he went with wife and dog, this time to South Africa. South Africa at that time was attracting a large number of international surfers along with the newly emerging international surf market, some legendary surf breaks were also a big attraction to GRC, however the South African lifestyle was not for him or family, so as soon as possible it was off to Europe. The search to find a place to build their dream surfboard company covered a lot of territory in Europe during the winter of 1975, but they were unable to match the Californian dream they had been seeking, so after many cold and dismal weeks trucking around in the kombie, Greg decided it was time to head back to Australia where he spent the next few years honing his skills, shaping for various well-known surfboard brands. Then in 1978 it all fell into place, Sydney’s northern beaches were rapidly becoming the epicentre of world surfing with more world champions and surf professionals based, and living on that part of the coast than anywhere else. Greg’s reputation for producing “magic” was growing fast with the elite of the surfing fraternity. So in 1978 GRC started ALOHA SURFBOARDS in Brookvale and the brand has never really looked back. Aloha picked up momentum very quickly and in a relatively short time was attracting positive support from an unprecedented number of world professionals. As a result the Aloha brand was set to march across most surfing territories over the next decade following the world tour, and with Greg still travelling and guest shaping in Japan and the US the brand was being exposed on all major surfing continents. Professional surfing has helped shape the Aloha ethos and has very much driven the design. In 1979 a young Barton Lynch came on board followed by an even younger Damien Hardman shortly after, both were to claim successful World Titles with Damien backing up for number 2 in 1990, joined by Aloha’s first girl team member Pam Burridge winning the Ladies World Championship in the same year. The team has always been one of Aloha’s strengths. From contest genius Damien Hardman to free surfing hellman Mark Mathews, Aloha’s team both past and present, reads like a who’s who of surfing, with many long term members coming on board as juniors before making their way to the prestigious ranks of the ASP tour. Over the years surfers such as Barton Lynch, Richard Cram, Shane Powell, Chris Davidson, Beau Emerton, Luke Egan, Johnny Boy Gomes, Koby Abberton, Nathan Hedge, Dayyan Neve, Kai Otton and Richie Lovett to name but a few, have through their extraordinary surfing and individual personalities, cemented the Aloha brand into Australia’s rich surfing history. At 30 years young Aloha is recognised by name and graphic throughout the surfing world, its respect and acknowledgement from the world’s surfers is a true testament to its ability to be at the forefront of surfing. 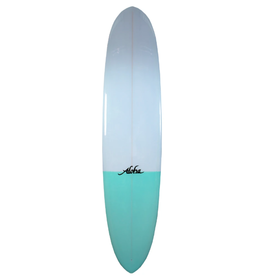